Pointers can be confusing to beginner Arduino programmers. This tutorial aims to help you understand the concept of pointers by looking at software and hardware points of view.

Pointers are directly tied to a microprocessor/microcontroller’s memory. For this article, we will limit ourselves to the Arduino UNO board whose main microcontroller is the ATMega328p.

The ATMega328p’s memory is as follows:

The flash memory stores the program or sketch. Out of its 32,000 bytes, 500 bytes are for the bootloader. The flash memory and the EEPROM are non-volatile storage areas, meaning, their data remain when the device is off.

The SRAM is volatile memory and is used at the time the sketch is running. In Arduino, it contains the static and global variables, dynamically allocated data items (known as heap) and local variables (known as stack).

Now what happens when we declare a variable in Arduino? Depending on the type of variable, a portion of the SRAM is used. Their location is known through their address.

Simply put, a pointer is a variable that points the address in memory of another variable. A pointer is declared in Arduino like this:

The above statement is useless unless we specify where it points to. Let’s say we want to point the address of an integer variable:

To point the address of i and put that address to p, we do:

Now we are interested as to what is the location of i in SRAM if ever i is the first variable declared. The sketch below prints the address of i in serial monitor:

If you’re asking about this line:

This is casting p to an unsigned 16-bit integer because the Serial.println() function can’t print pointer values directly.

Run the sketch and this shows in the serial monitor: 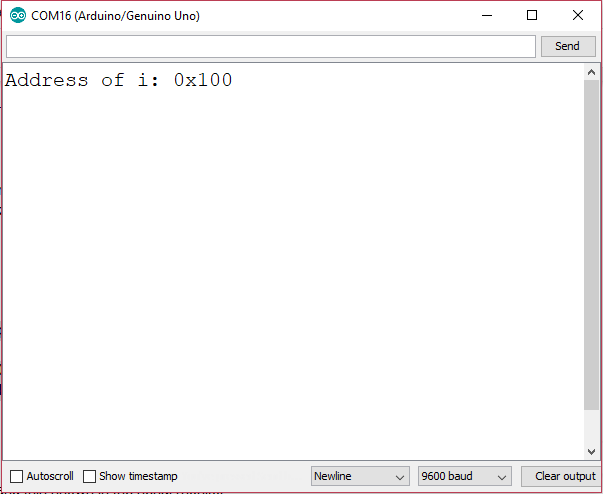 This shows that the variable i, an integer type that uses 2-byte space, is stored in the memory location 0x100. Conveniently, 0x100 is the start address of the Arduino’s SRAM. 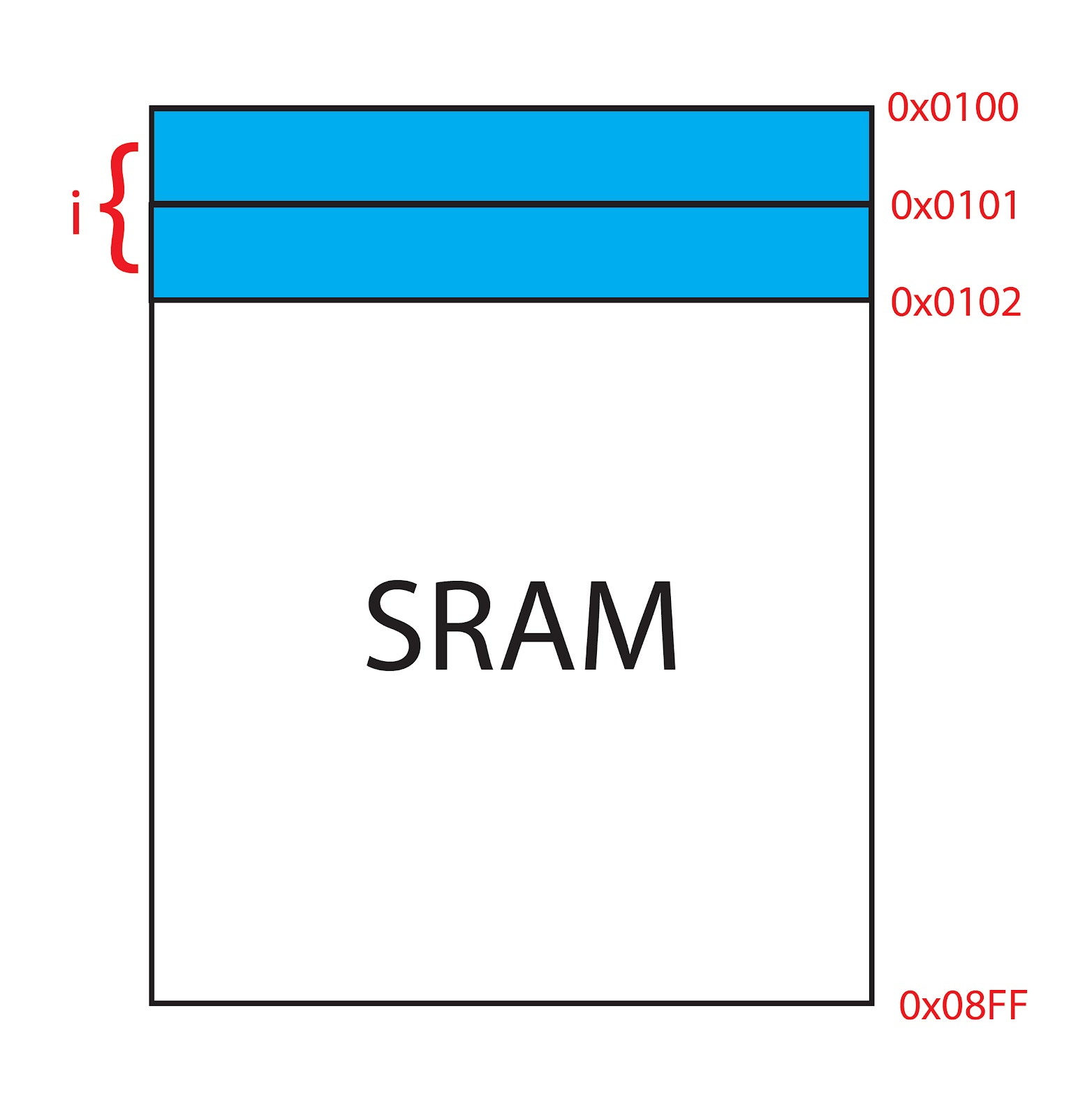 This location is reserved for the i variable as it’s declared as a global variable being it outside setup() and loop(). As already mentioned global variables are static data.

Also note that the pointer variable p itself is using a space in the SRAM. To locate the address of p, we can assign another pointer that points at p:

The full sketch would be:

This will print a memory address that is far from that of the address of i. This is because address of pointers are stored in stack.

Using More than One Pointer

If we are to add another variable and another pointer: 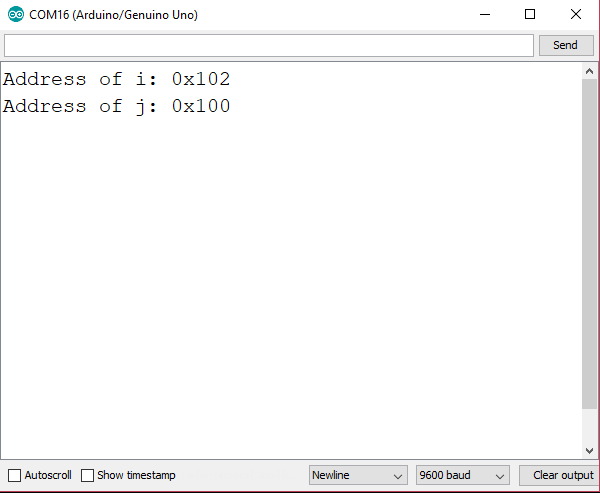 Even though that i’s declaration came first before j, j takes the 100H address while i takes the 102H address. Both are still global variables and thus take the static data portion of SRAM. 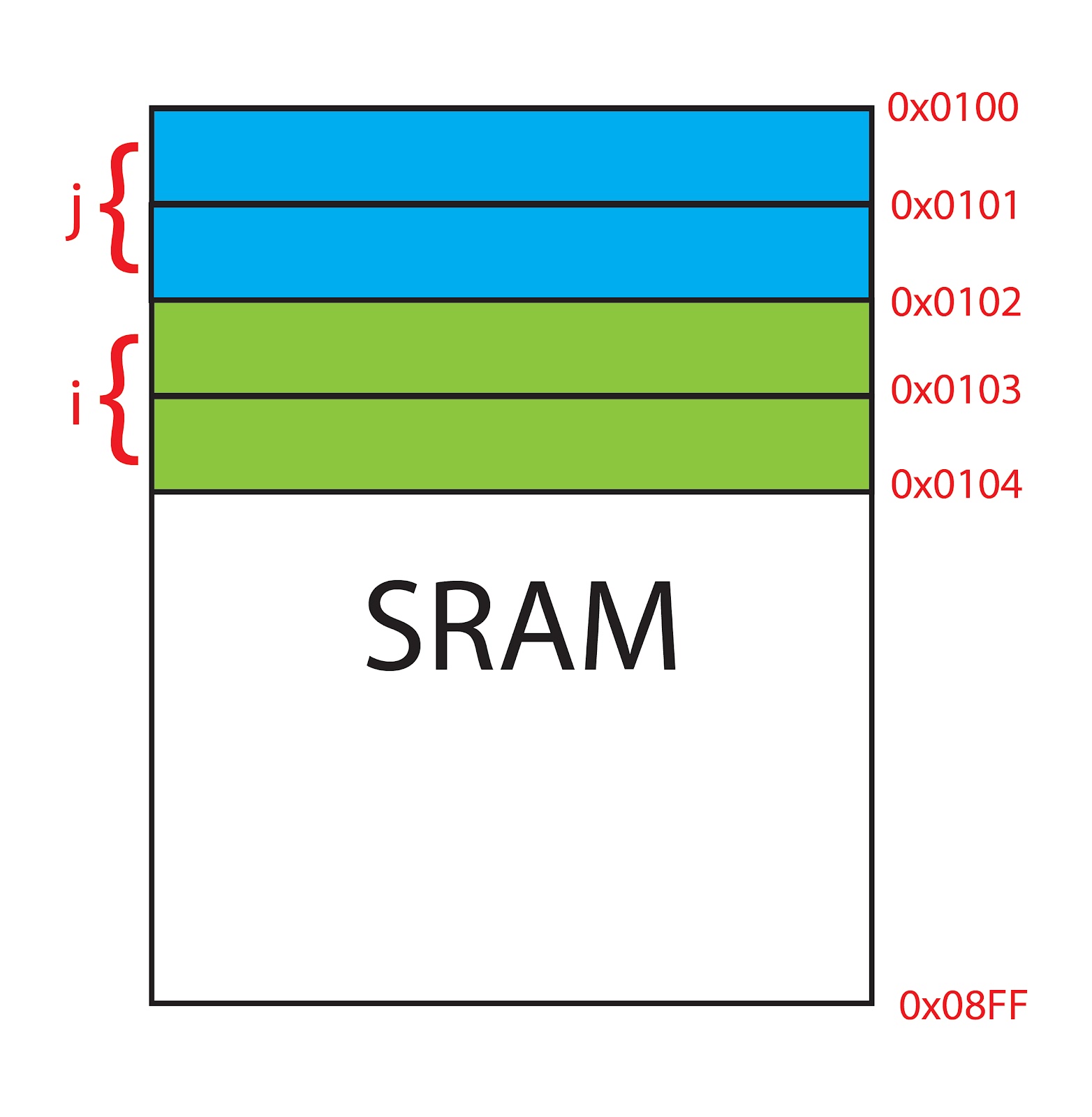 A Pointer to Array

Let’s say we have an array of integers:

Can we assign a pointer for this array?

We will have a compiler error:

This is because i is already the pointer to the array i. To make the above sketch works, we remove the & reference:

The sketch compiles and the serial monitor shows: 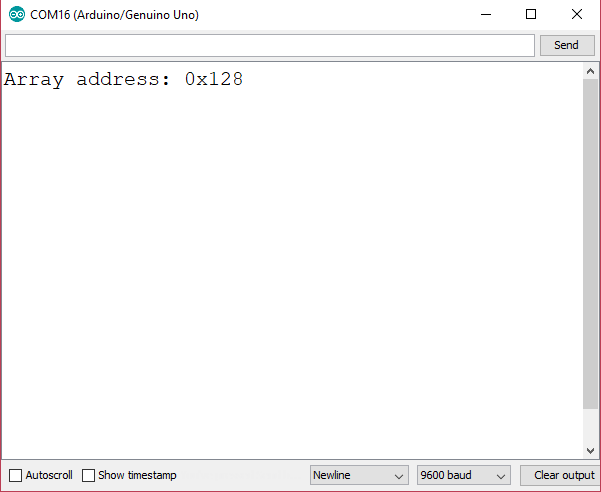 Thus, the address of the array i in the sketch above is 128H. Just in case, global arrays such as this one is also stored in static data.