Home / Project Building / What is a Soldering Station? 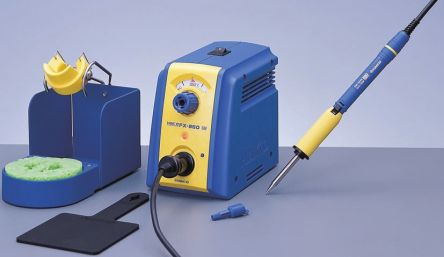 How to Use a Soldering Station

Experts agree that quick soldering needs high temperatures. But how would we define high in this case? It depends on what you are trying to solder. Normally, lower temperature is needed for soldering smaller electronic components compared to working on larger ones. I will not say what the exact temperatures are because they may vary depending on what type of soldering station do you own.

A good soldering station should have accurate temperature control and ESD protection. Temperature control can be analog or digital. The analog scheme uses on-off control: the iron’s heating element heats to an upper temperature limit then turns off; if it cools lower than a lower limit it the heating element turns on. This type of control is less expensive but less efficient and may lead to overheating. Stations employing digital control (via PID control and a microprocessor) are more expensive but are more precise.

Good soldering stations must also have a set of soldering iron tips you can select as you vary your soldering job. The station must also be well designed to lessen fatigue for the user.

If you are building your own printed circuit board (PCB), you most likely encounter problems …