Eager to learn Arduino programming? The best way to learn how to use the popular microcontroller board is by building projects! The strength of the whole Arduino platform is that it doesn’t require professional PCB building to make a circuit work. All you need is the best Arduino starter kit and you’re good to go!

You definitely can’t make a top ten best Arduino kit without the official one. Although admittedly the priciest among this list, the strength of this kit is the included Arduino projects book that includes 15 projects suitable for beginners.

The kit includes an original Arduino UNO, sensors, motors, even resistors, capacitors and transistors. Purchasing the Arduino official kit will not only introduce you to Arduino programming but to electronics itself.

For those who have a tight budget, Arduino clones are the best option. Elegoo’s Arduino starter kit feature the Elegoo UNO which functions exactly the same as the original but colored black. 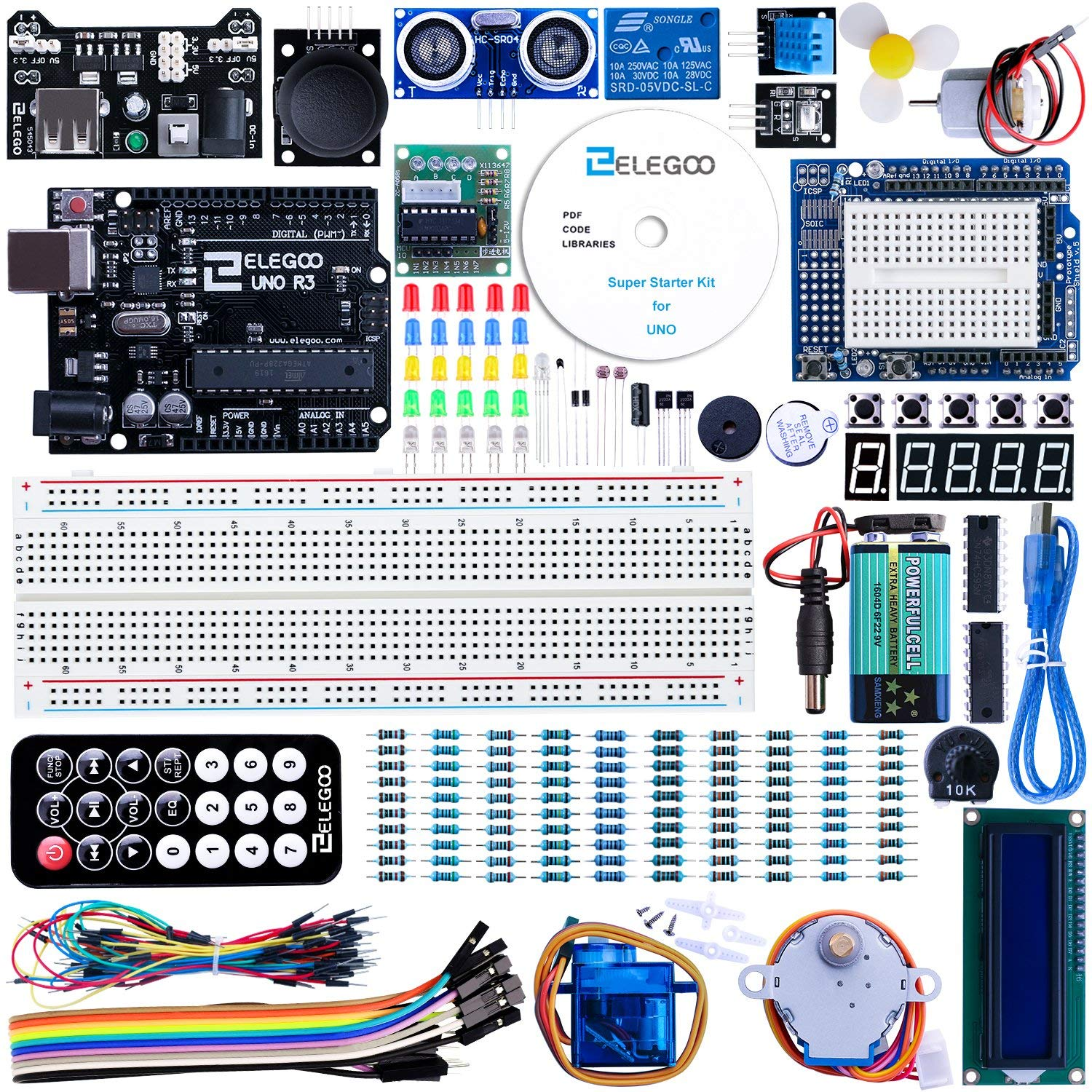 Now for the kit: it comes with a larger breadboard, a stepper motor instead of a dc motor and an LCD with headers already soldered for easy prototyping. A CD with example codes is also provided. Overall a good value!

The strength of the Vilros Ultimate Starter Kit is the included fully-illustrated guide book. I mean, just look at this: 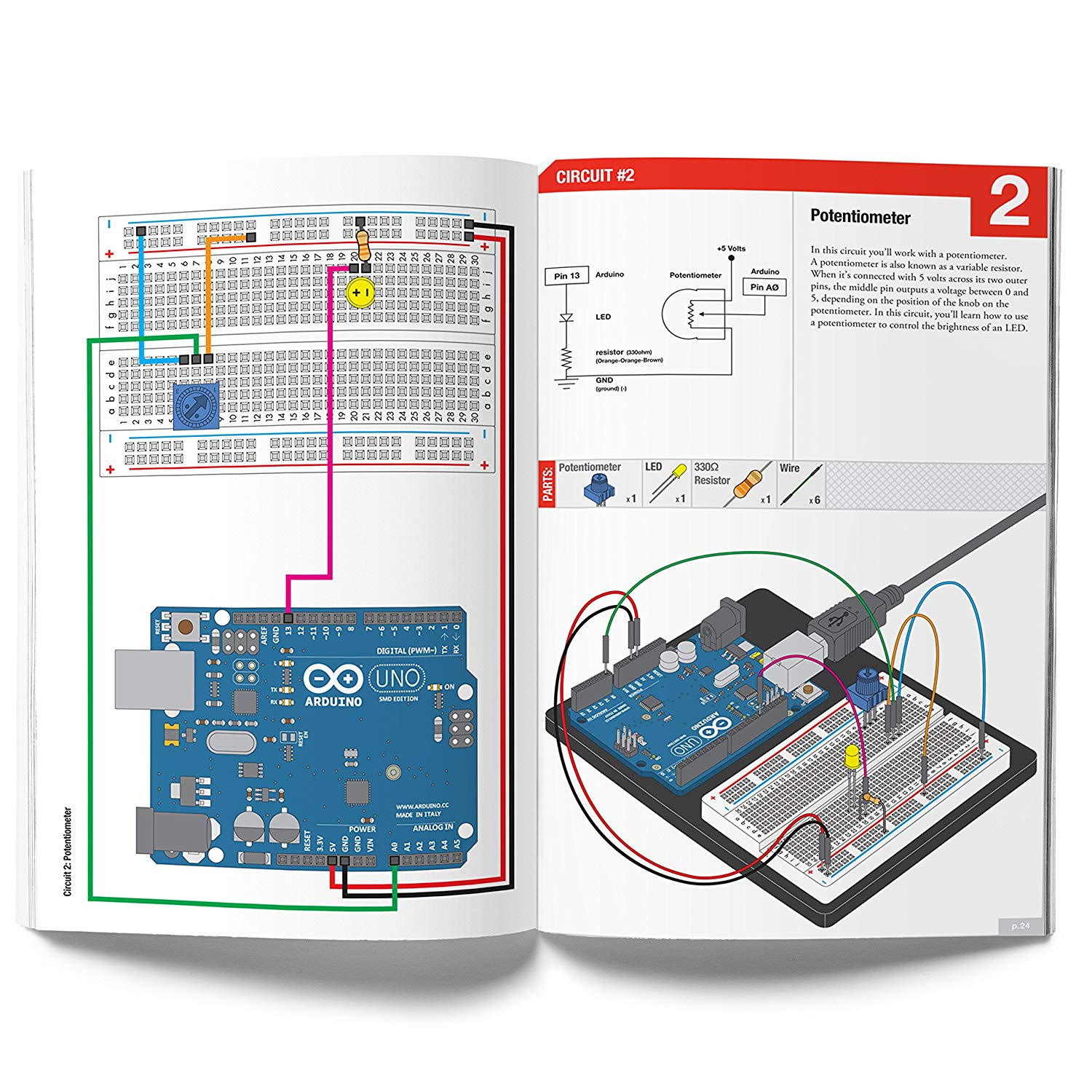 This kit features an original Arduino UNO and 190+ electronic parts including relays, transistors and this handy holder with mini breadboard: 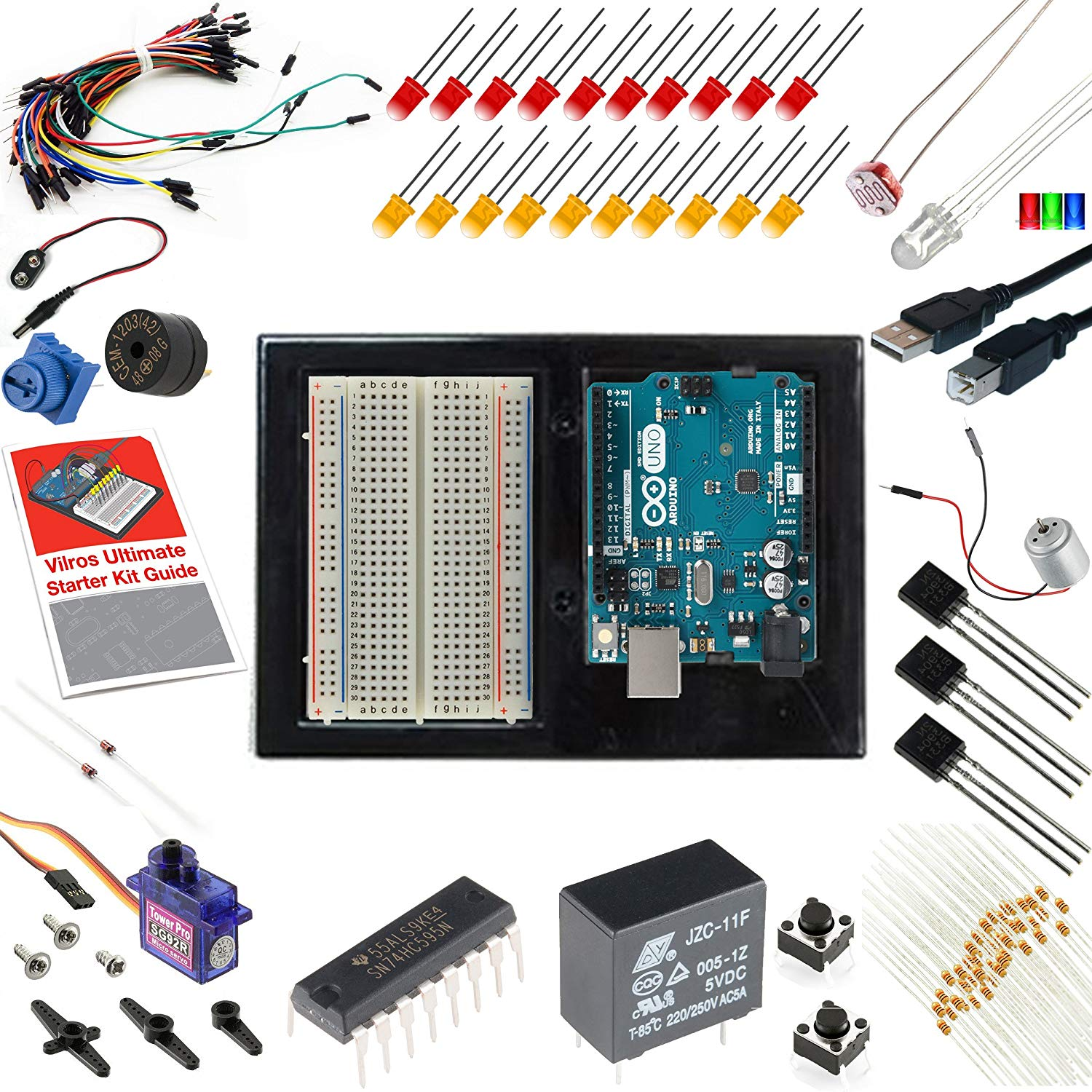 The Kuman Arduino Starter Kit is about the same price as Elegoo’s but features a different set of electronic components. You have a IR transceiver set with remote control, a prototyping shield, touch sensor and an 8×8 LED matrix. 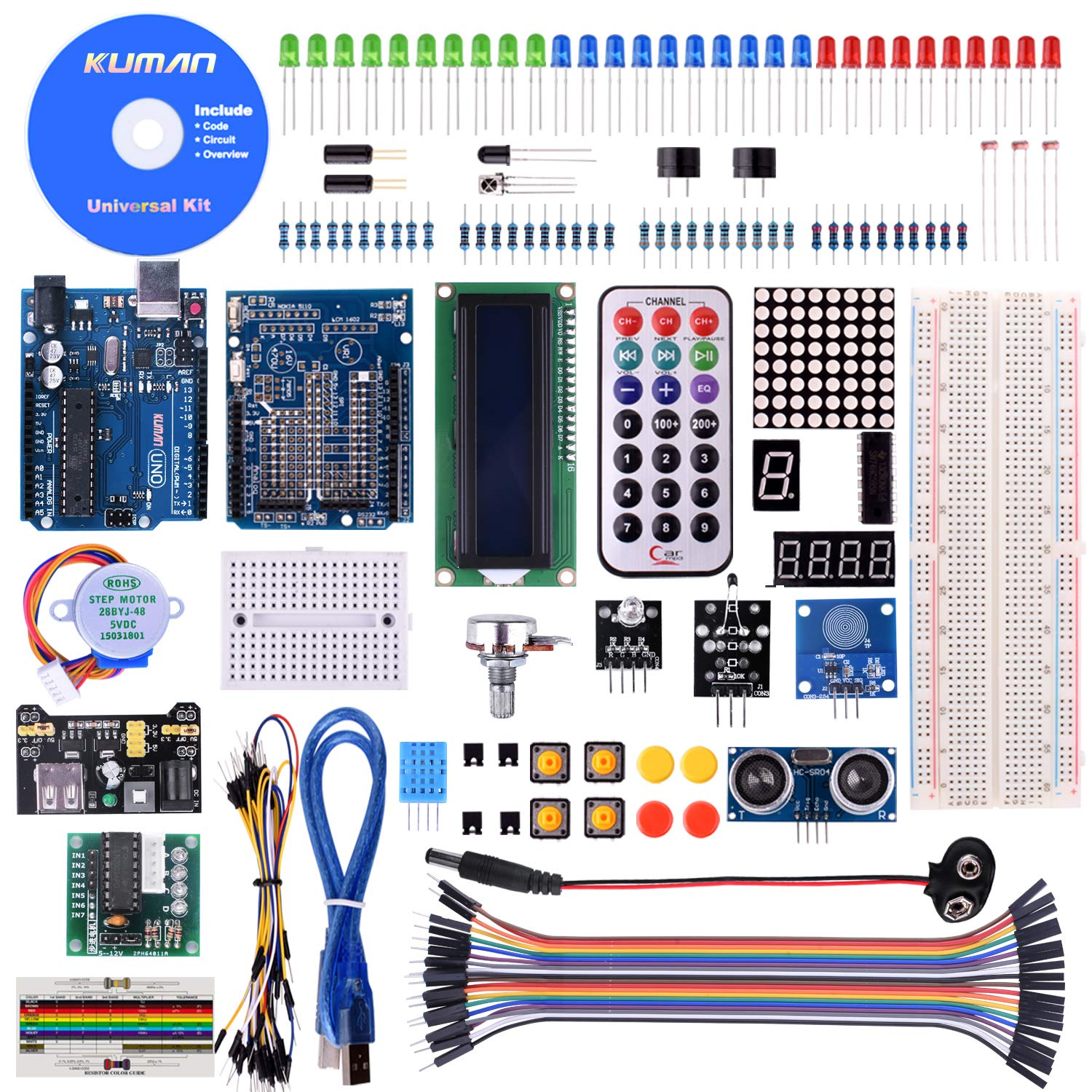 But what I really like about this kit is the nice plastic storage box it comes with it: 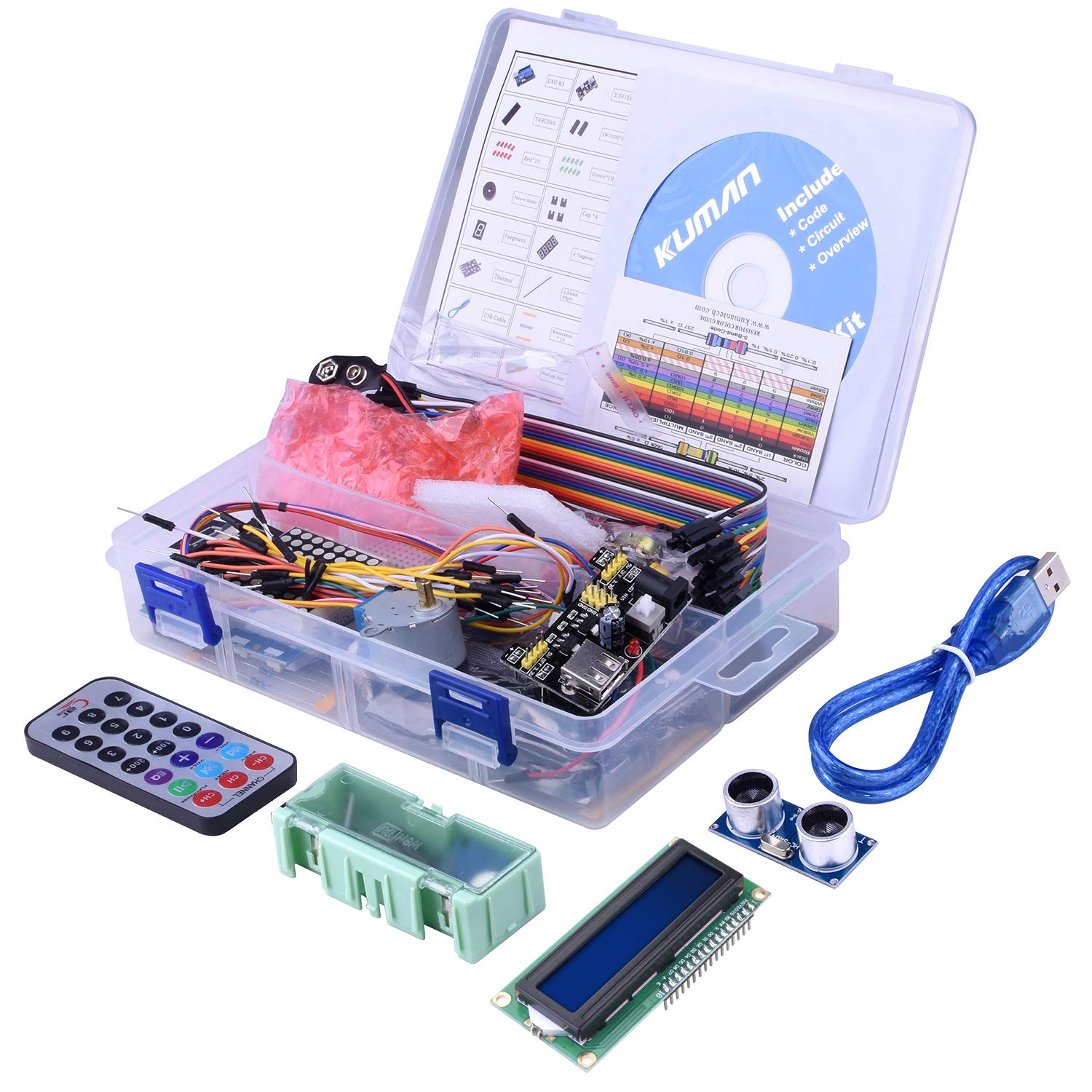 And yeah a CD with tutorials and example codes come with it too.

Using an Arduino is easy but the Grove starter kit by Seeedstudio makes it even more easier. You wouldn’t need a breadboard for this one; LEDs, sensors and other input devices can be easily wired to the Arduino through Grove modules: 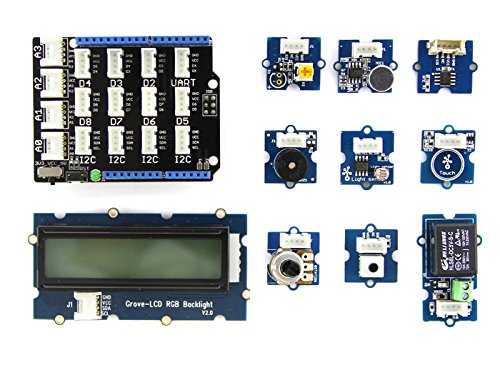 Seeedstudio also have an excellent website where you can learn more about this kit and their other products. This is the best option if you are an absolute beginner in electronics prototyping.

DFRobot’s starter kit is not much different from the others listed here but they really have their own style:

I mean look at that toolbox:

But seriously, similar to Seeedstudio, DFRobot’s strength lies in their great resources, both in their website and the free app.

If you want your kid to start learning electronics early, this kit would be excellent for you. Kookye’s starter kit work by sewing the Arduino Lilypad with provided fabrics. 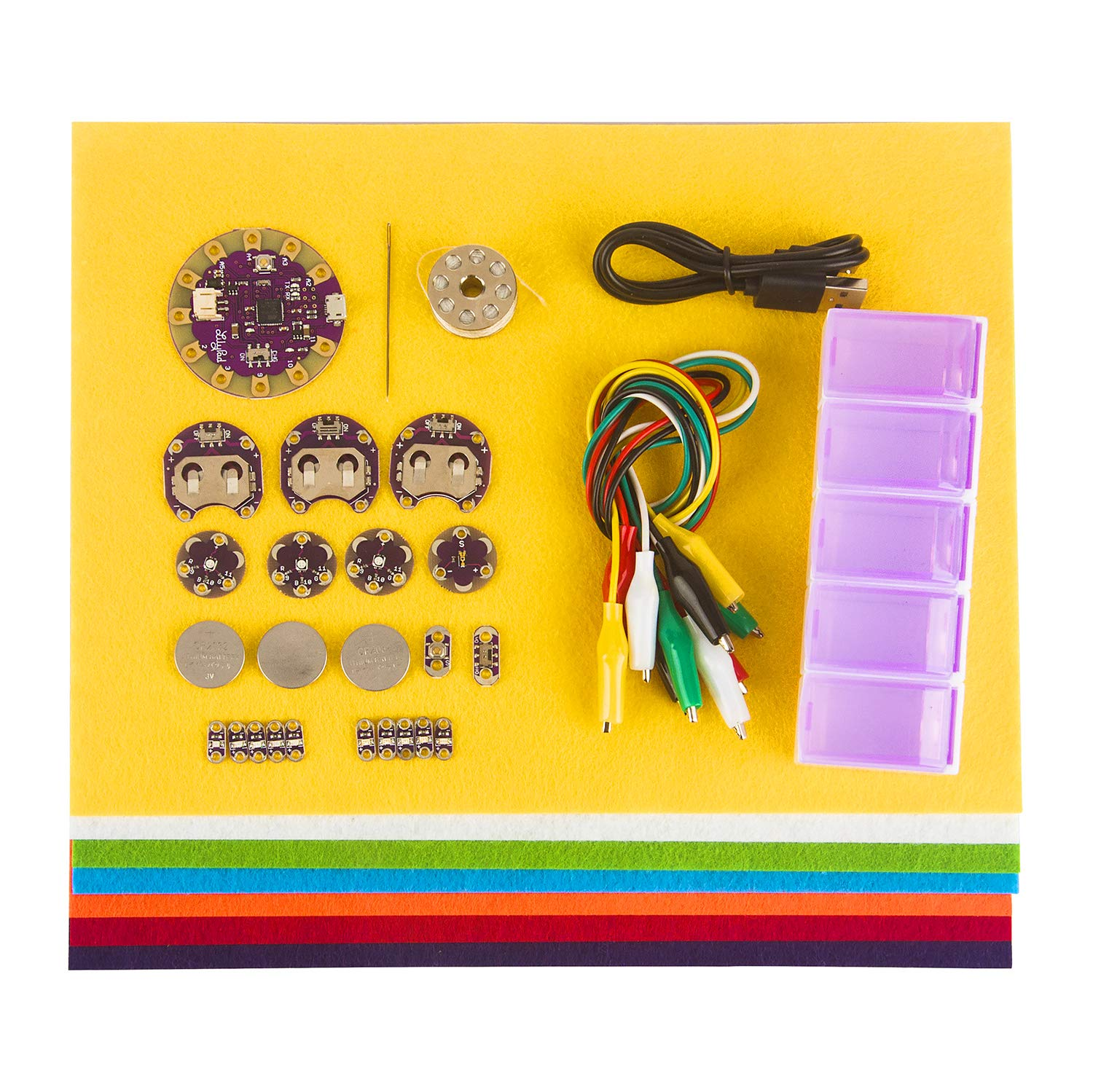 The kit also comes with a thread of conductive bobbin for wiring the circuit for your creation. You can create toys, masks, pins with glowing lights and sounds! 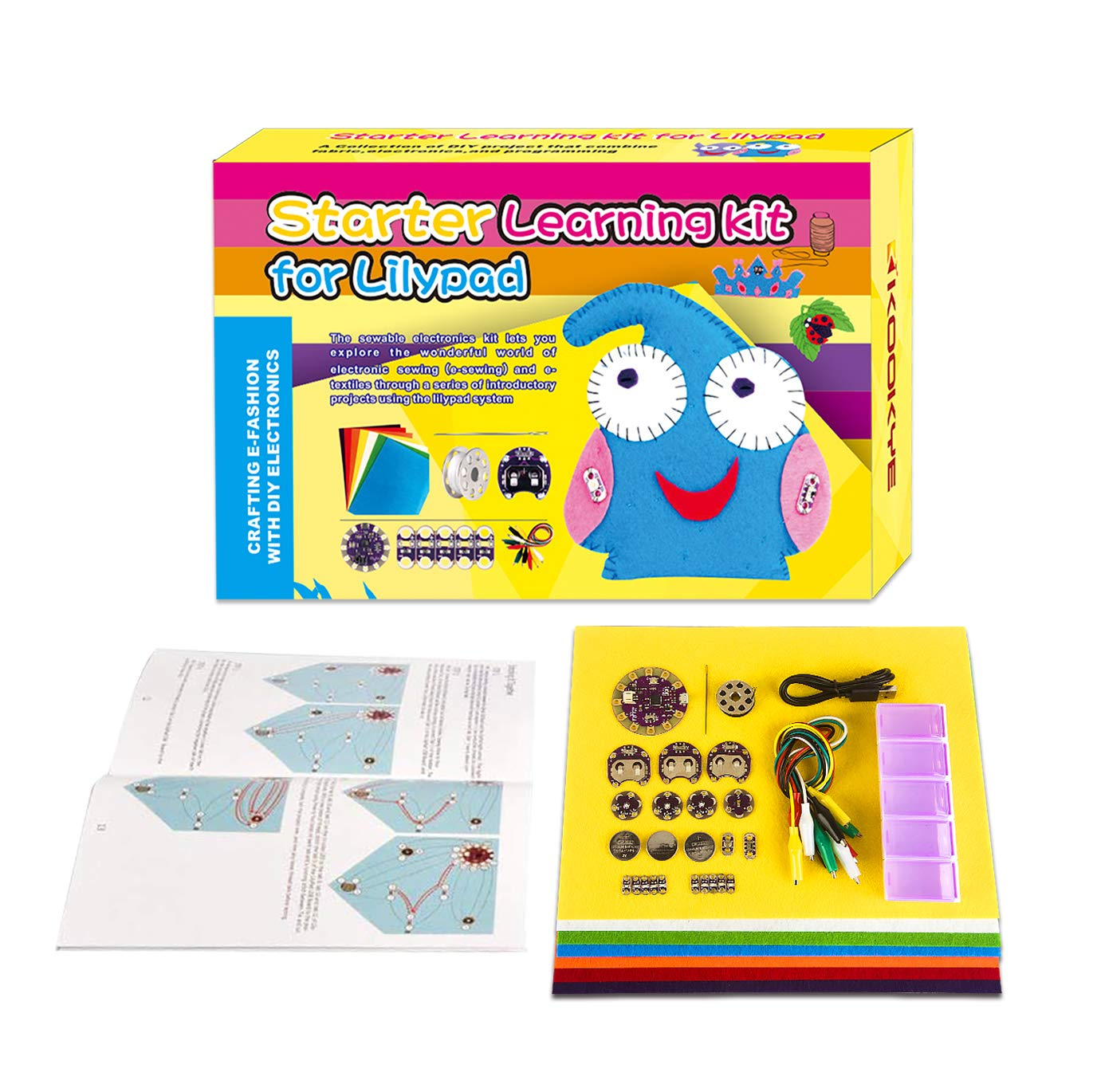 Snapino features snap circuits which are easy to connect modules. 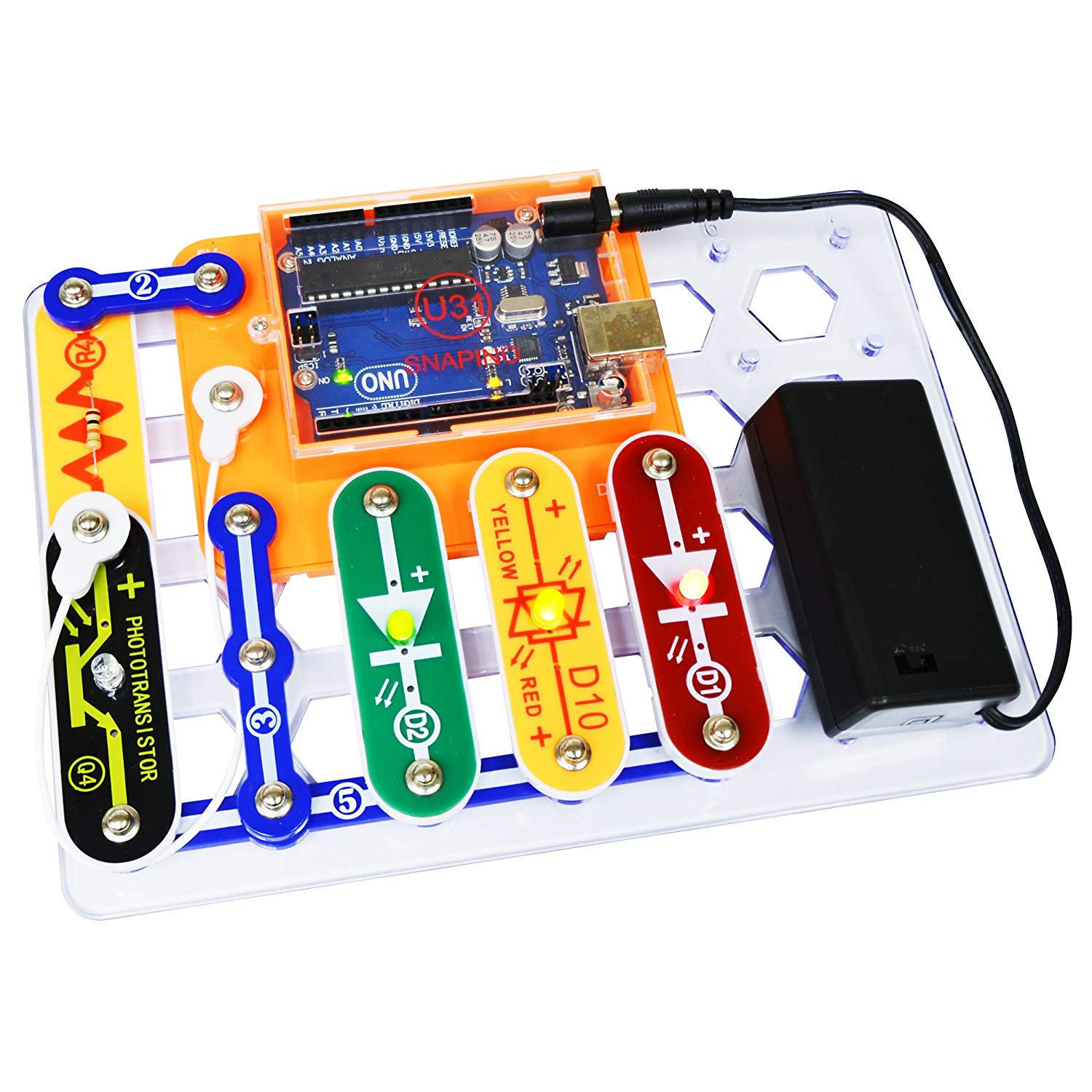 But unlike Seeedstudio’s Grove, Snapino’s whole scheme is limited to a few possible projects. Still, this kit is good for children making their first steps into the world of electronics.

This Arduino starter kit is easy to use with the Grove-like shield and modules but it’s somehow limited to input devices (buttons, potentiometers) and output devices (bunch of LEDs). 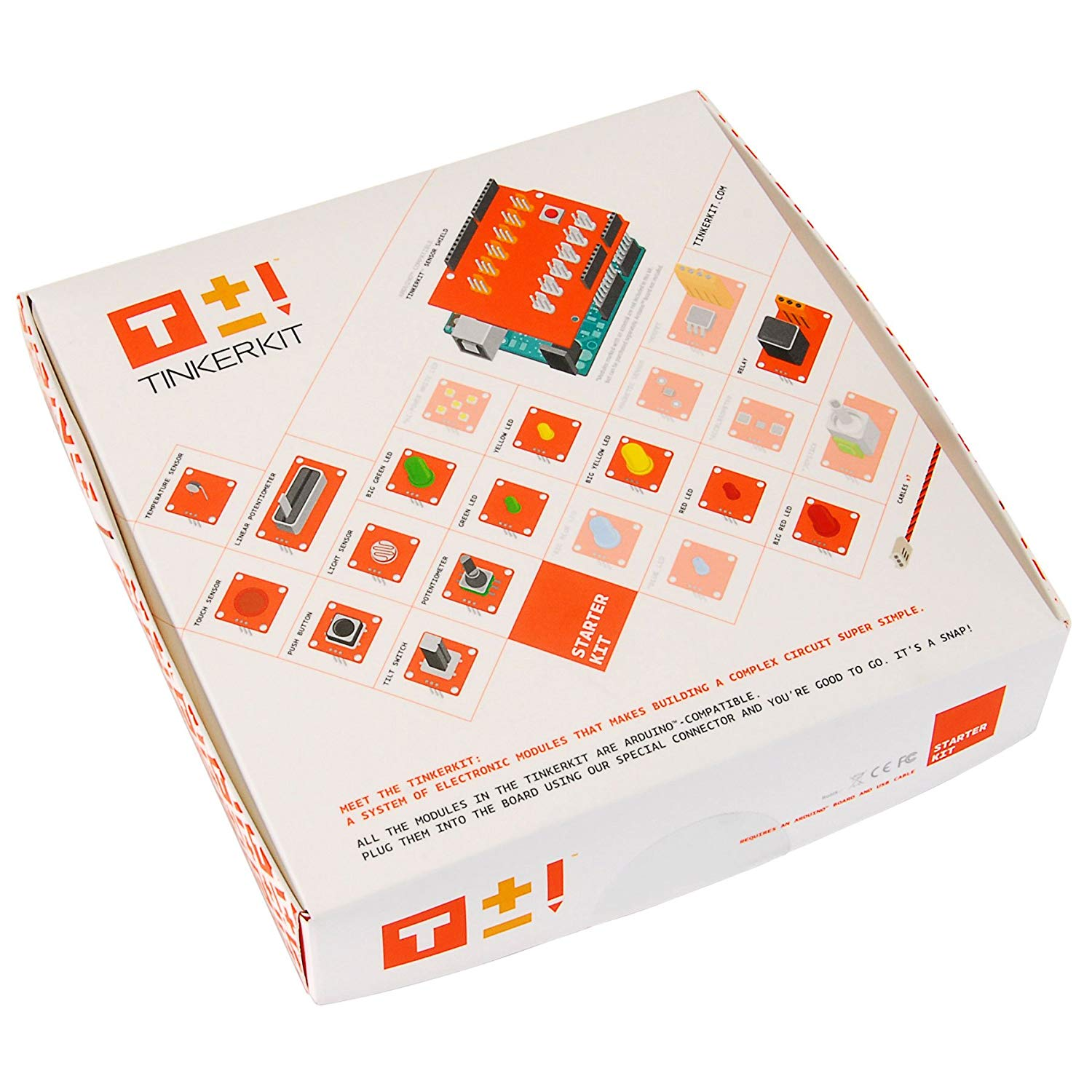 However, the kit doesn’t include an Arduino unit so you still need to purchase one. A good purchase for those who want to learn Arduinos regarding of age.

With 42 sensor modules, this starter kit is indeed ultimate. Seriously, you can build hundreds of Arduino projects with this kit alone. 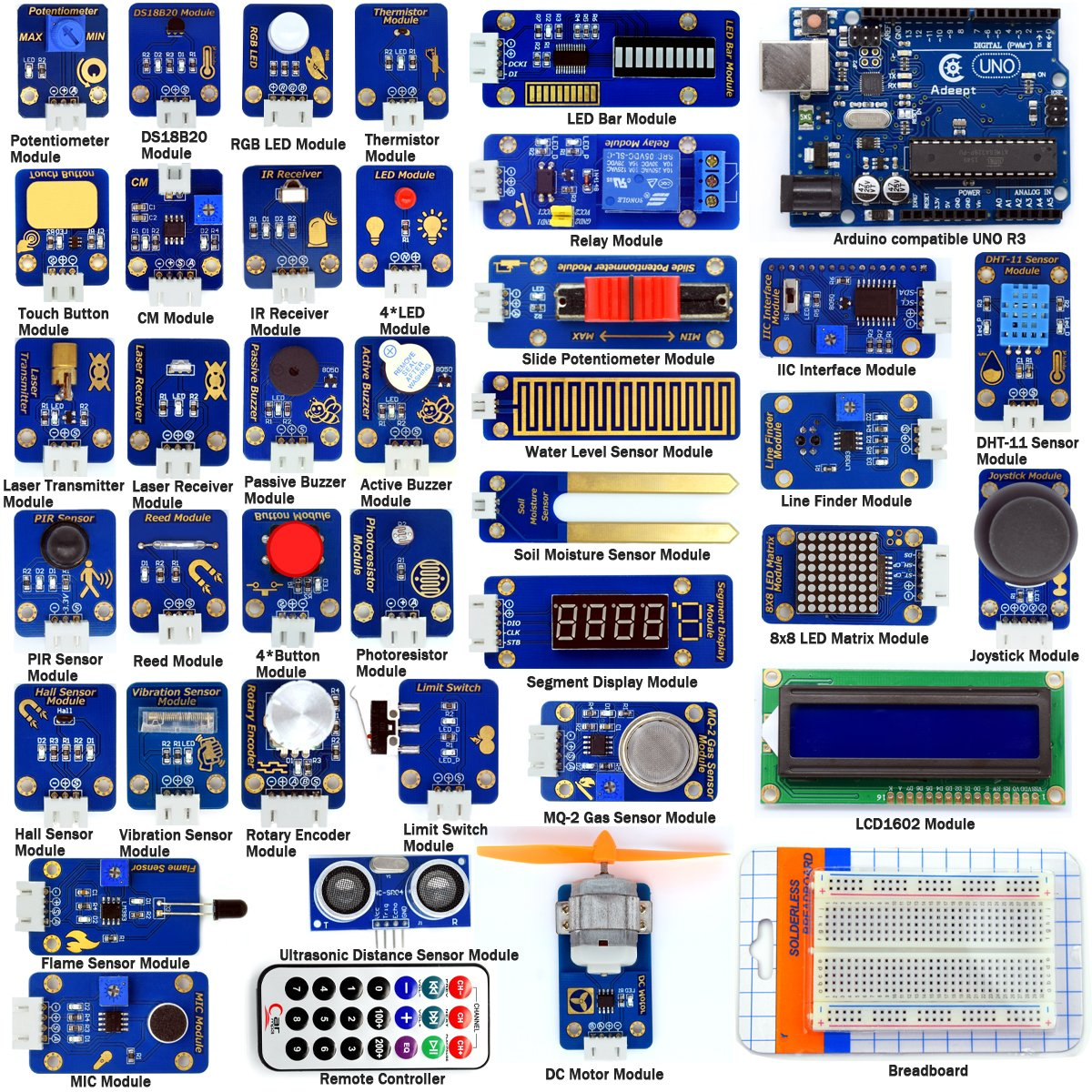 Each sensor module comes with a small bag for protection and everything is packed into a plastic toolbox. The kit also comes with a guidebook containing 36 chapters of electronic project building.

Personally, the best Arduino starter kit is the one with multiple input and output devices, including sensors, LCD screens and some passive components like resistors and capacitors. A great starter kit should also include a very helpful guidebook like most of the ones presented in this list. Purchase a kit now and start building Arduino projects!

A soldering station refers to a device that includes the soldering iron, desoldering tools, and …